On July 24, 2020 the Rohnert Park Police Department was contacted by Child Protective Services concerning two children, a 17-year-old girl and a 15-year-old boy, that were reporting abuse at the hands of their foster parents.  They reported that they had been taken to live with relatives in Mexico approximately 18 months before and had recently been taken into protective custody.

Rohnert Park Detectives coordinated with the FBI, US Embassy and Child Protective Services in order to return to the children to a safe location within Sonoma County to be forensically interviewed.

During that interview the siblings, who had been adopted in 2008, mentioned an older sister that had been adopted with them and had gone missing 8-10 years before and had "not been heard from or seen since."

That older sister has been identified as Kaya Marie Centeno.  She was last seen when she was 8-years-old as a second grader at John Reed School in Rohnert Park before she was pulled from the school, allegedly to be home schooled.

After the interview, detectives obtained and executed a search warrant at the Rohnert Park residence of Jose Antonio Centeno, 54, and Gina Centeno, 50, where the children alleged the abuse had happened.  According to the statement issued by the department, "detectives found evidence to corroborate the victim's statements."

Both Jose and Gina were taken into custody on August 18 and remain in the Sonoma County Jail without bail. They are scheduled to appear back in court on October 5 to enter a plea on the charges they currently face.

Gina is charged with three counts of aggravated kidnapping and two counts of torture.  All charges against her are felonies.

If convicted on the charges currently filed against them they face the possibility of life in jail.

No charges have been filed related to Kaya's disappearance and detectives are treating it as an active missing persons case.  They are asking anyone with information to contact the Rohnert Park Department of Public Safety at (707) 584-2612. 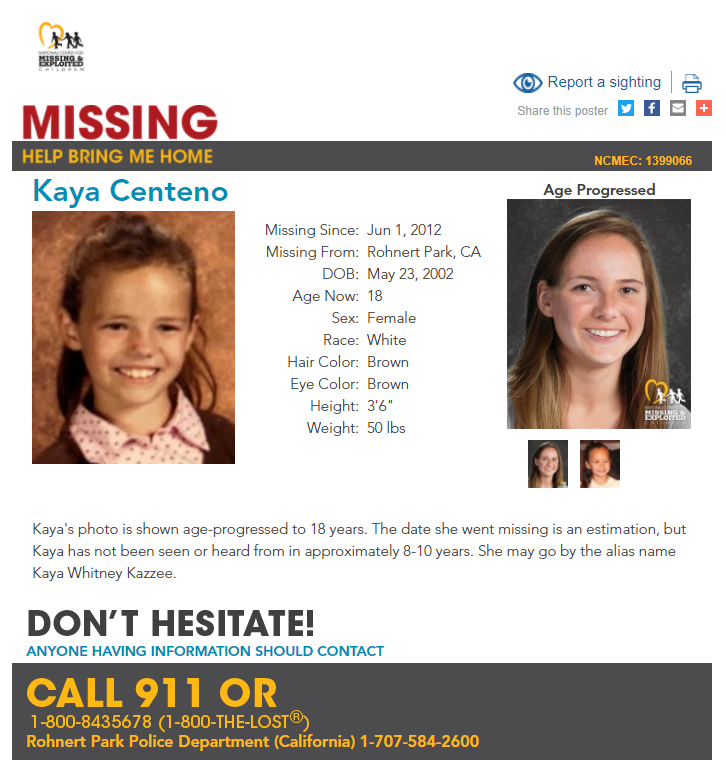