It was close to 11 pm on the night of Wednesday, September 30th, well past the normal hours of operation for the Saints Peter and Paul Catholic Church in New Orleans, Louisiana.  So when a passerby saw the lights were still on inside, they were understandably curious.

When they peered through the glass door and windows of the property though, which are both said to give clear views of the church altar according to the police report, they saw the priest, partially clad in his customary attire with two women performing sex acts on the altar.  There was "stage lighting" and the act was being recorded with a cell phone and additional camera on a tripod.

The passerby is said to have recorded some footage of the acts on their own cell phone before calling police to the scene.

37-year-old Travis Clark, who had been ordained in 2013, was reportedly absent from the sanctuary when officers first arrived to the scene.

Upon entering the church, officers first made contact with 41-year-old Mindy Dixon and 23-year-old Melissa Cheng who stated that they were friends of the priest and were filming "role play" with his permission.

The three were arrested on an obscenity charge as "obscene acts occurred on the altar, which is clearly visible from the street." The three have since bonded out of custody.

No charges have yet been filed by the District Attorney's office, but NOLA.com states that charges generally take two weeks after an arrest to be filed by the office.  So if charges will be filed, it would be likely that they should be filed before the end of the week after a charging conference with law enforcement.

The attorney representing Dixon and Cheng, Bradley Phillips, has issued a public statement stating that the arrest was "appalling" as the conduct was private and between consenting adults.  "The fact that this involved a priest or took place in a church is completely irrelevant. The only pertinent question is if it took place in the view of the public.  Clearly that is not the case."

Dixon, who NOLA.com reported had tweeted before the trip that she was heading to New Orleans to "defile a house of God" has clearly stated on Twitter that she believes neither in God nor Satan despite the fact that the imagery she often uses is clearly satanic in nature including an ad that displays an inverted cross and brands her as an "elite purveyor of sin." 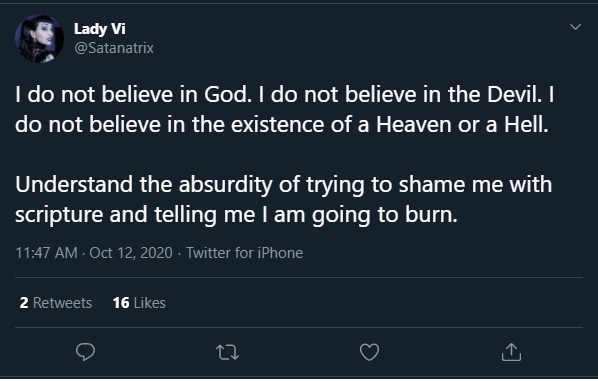 The arrests have garnered varying opinions from attorneys in Louisiana.

A Saint Tammany Parish Lawyer, Tara Zeller has stated that it's not clear the trio should have been arrested.  "Is it distasteful? Yes.  Should it result in removal from his position? Yes. But I don't know if it was a crime."

Another attorney, Craig Mordock, a criminal defense lawyer, seemed to be of the opinion though that this is just the type of event that the obscenity law was created for, stating that the law was written as a prohibition to "hard core sexual conduct" which would be seen as "patently offensive" or catered to "prurient" interests.

"I personally don't like the obscenity statute," NOLA quoted Mordock as saying. "But if you're going to criminalize something like this, the facts in this case fit."

In a video statement issued by New Orleans Archbishop Gregory Aymond on October 9, he denounced Clark's actions stating "His obscene behavior was deplorable.  His desecration of the altar in the church was demonic, and I am infuriated by his actions."  Clark was removed from his position "immediately" and "will never serve again in Catholic ministry."

Aymond further stated that "when the details of the actions became clear, we had the altar removed and burned.  I will consecrate a new altar tomorrow."

Clark had just been appointed as chaplain at the Pope John Paul II High School in place of Rev. Pat Wattigny who had resigned over the summer due to text messages sent to a student.

Aymond also addressed Wittigny in his statement saying that there was no indication of any abuse or allegations of abuse within the messages, but that any communication with students via text was forbidden by the church's "technology policy."  Wittigny was corrected on this matter and the texts were said to have stopped for a period of time before resuming again, months later.  It was at that time that Wittigny was asked to resign.

At the conclusion of a 30-day retreat and psychological exams, Wittigny is said to have admitted to sexually abusing a student in 2013, months after he had initially been appointed as chaplain at the school.  Wittigny was officially removed from his position on October 1.