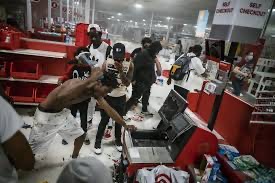 This is VeeJay reporting to you from an undisclosed location a mere 24 miles south of Lake Street—the epicenter of the now-nationwide George Floyd “protests.”

First, a bit of background. Minneapolis does not have what would be officially termed as a ghetto, or an area known as “the projects;” but there are certainly a few unsavory places that WEIRD[1] people wouldn’t want to be milling around late at night; and Lake Street has had a rather sordid reputation going all the way back to when my grandfather was a boy.

To anyone who might be tempted to believe that the Lake Street riots are another Sandy Hook and it’s nothing but smoke, mirrors, and green screens—I can assure you—Lake Street is looking pretty close to Baghdad right about now. This is not to say that there may not be some sort of planned pretense or false flag frolicsomeness behind it—but rest assured, the city is, even as I write this…on literal fire.

With that said, I can find at least ONE thing I can agree with Minneapolis mayor Jacob Frey on and that is this, “The people who are doing this are not Minneapolis residents. They are coming in largely from outside of this city, from outside the region to prey on everything that we have built over the last several decades.” Likewise, MN Governor, Tim Walz, believes that the, “most-recent violence — arson, looting and even shooting at police officers and firefighters on Friday night and early Saturday — is being fanned by well-organized groups that are trained in urban warfare tactics.”

Frankly, that makes A LOT more sense to me than a low-income community going in and burning down their own minority-owned mom and pop shops, many of which were run by their own family, friends, and neighbors; or destroying retail and grocery stores that will put hundreds of their neighbors into unemployment lines.

But what I really want to talk about today are some of the “extras” milling around in the background of this scene; namely, Target Stores and Planned Parenthood. What I am about to say is neither dogmatic or prophetic in nature—it is the mere musings of a citizen of Minnesota, looking at these events unfolding in her backyard, wondering if Minneapolis is much, much more than simply the zip code once inhabited by a man named George Floyd.

Target Corporation is headquartered here in Minneapolis. In April of 2016, Coach Dave Daubenmire posted a short cell phone video to You Tube. In the under-3-minute video, he showed a clash between himself and a Target employee, while protesting the store’s recently updated transgender bathroom policy. Also, noteworthy, the You Tube category for Coach Dave’s video is “Comedy.” Did Coach Dave select that sardonically—or is it yet more evidence of social media sabotage and censorship?

What a lot of people may not know is that Coach’s viral video led to tens of millions of dollars in lost revenue and added expenses for Target. You can read here that, not only did their sales figures drop 6% in three quarters (due to shopper boycotts), but they spent an additional $20mm installing single-occupancy restrooms for transgender customers who were no longer welcome to use the restrooms of their choice before being so brazenly told that they could.

Target Corporation, in a “middle finger” response to the transgender bathroom backlash, proceeded to create their own line of clothing, branded PRIDE.

“A passionate group of team members from across Target—from merchandising, marketing, digital and more—collaborated to bring this year’s collection of more than 90 items to stores and Target.com. The group worked closely with Target’s Pride Business Council—an HQ-based team member resource group—to create an assortment that is inclusive. That includes clothing with extended sizes, as well as items perfect for every Pride celebration—from festivals and parades to pool parties and picnics.”

That’s right y’all, Target Corporation—located a mere 3.5 miles from Lake Street—has a “Pride Business Council” which, among other things, is there to design and create LGBTQ inclusive rainbow-bedecked onesies for your newborn.

Folks, I am not one of the boycott-Betty’s who self-righteously runs around ticking businesses off my list every time they violate my biblical worldview. I understand that, unless I am willing to live buck naked in a field, drinking rainwater and eating Dandelions, I am going to violate my own code of ethics every single time I purchase anything, anywhere. Sin and corruption and elite powerbrokers are behind nearly every—if not every—product and service available on the market.

With that said, I did decide two years ago to stop shopping at Target. Simply and only because I am a public voice advocating against the LGBTQ agenda/movement and I personally feel that setting myself up as an advocate, and then openly giving my money to an organization that I KNOW will use it to fuel the transgender-movement engines is something I cannot ethically do without being a hypocrite.

So, fast forward four years—four years after Target’s now infamous Restroomgate, and now we have a huge monopoly corporation that, during a national shut down of businesses—gets to remain open for business—gleaning MILLIONS of dollars’ worth of profits from out of the pockets of hard-working mom and pop shops who had to close their businesses down in the name of a sham.

To those merely looking at things through the two eyes planted in their skull, it would appear that there is no real justice in this world. Target has resurrected from the 2016 boycott and gone on to make billions of dollars. And that is not to even mention their great big, whopping “bonus check” otherwise known as COVID-19. But here we are now at the close of May 2020, and what has happened? A destructive riot breaks out in Minneapolis. Two Target stores (one on Lake Street and one in Midway) were taken down to the studs. I have seen the photos, and honestly, I think the Lake Street location would have underwent less damage had it been hit by a twister.

Could it be? Just muse with me for a minute—I am not being dogmatic or prophetic—I am merely asking you to let your mind wander for a mere moment. Could it be that there is some link between Target’s greed and hubris and those 100 Bible verses about Yahweh’s displeasure for those who use unjust weights and measures?

Minneapolis is primarily known for two things: mosquitoes and the Mall of America. We aren’t rich. We aren’t cool. We aren’t cutting edge. We’re basically a bunch of Swedes who work hard, stick to ourselves, and drink tons of black coffee. With cities like Oakland and Compton, Watts, the Bronx, Chicago…Minneapolis is the epicenter of a race war? It simply makes no sense. But could it be? Could it possibly be that while the world fixates on George Floyd…that Yahweh has His eyes right on Target?

I would also like to point another interesting fact out to the non-locals. The two areas hit heaviest by the looting and arson are Lake Street and Uptown. These are the EXACT locations of two of Minnesota’s busiest Planned Parenthood facilities. The Minneapolis building is located, not nearby, not in the vicinity, not a hop, skip, and a jump away, but ON Lake Street. As of today, just under 250 business in the Twin Cities have been vandalized, looted, spray-painted with profane graffiti, or burnt to the ground. This includes libraries, a charter school, barber shops, banks, pharmacies, credit unions, laundromats, a WIC office, gas stations, gift shops, low income housing units, tanning salons…you name it. Nothing was spared.

The Planned Parenthood on Lake Street and the Planned Parenthood in Uptown are not on any of the lists of damaged properties. Not even touched by the paint-splatter from the other businesses on both sides of them being demolished in the blind fury of the riots. It’s a MIRACLE!! Right?! I mean…what are the chances?

I have also noted with great interest that there isn’t a lot of talk about shelter in place and social distancing violations here in Minnesota. In fact, in the past 5 days, I haven’t heard one peep about the virus. One week ago, the governor of MN issued Executive Order 20-62,

“Minnesotans have made sacrifices to protect their neighbors by deferring large gatherings for in-person services and ceremonies, both religious and secular. I continue to urge all Minnesotans to limit their in-person interactions with people outside of their households. And, as I have emphasized in previous Executive Orders, I strongly urge Minnesotans at heightened risk to stay home except for essential activities, and I urge faith communities to continue to provide remote services to the maximum extent possible. And no faith community should feel compelled to open their facilities or provide services if they are not comfortable doing so. Nonetheless, to ensure the mental and spiritual health of Minnesotans, while continuing to protect the public health, it is necessary to take another step to allow for weddings, funerals, and services to continue with larger groups. To be clear, each step we take brings risk and responsibility for all. Those who disregard public health guidance endanger not only themselves, but their families and neighbors.”

In addition to the executive order, the Minnesota Department of Health issued guidance stating that churches in Minnesota could open on Sunday in limited capacity, but “…strongly recommends that everyone wear masks and that there is no congregate singing.” (Wording and bold text both taken directly from the MINNPOST website).

It’s official, folks, praising God spreads coronavirus! Apparently, the spittle of song spreads the virus with more potency than mere speaking—or some such unscientific, untested, unproven nonsense like that. Here…have another cup of Soma and fuggetaboutit!

But it even goes beyond singing. One pastor of a large suburban megachurch here in Minnesota posted on the church website, “No hugging, no hand shaking, no hanging out!”  So, while tens of thousands of Minnesotan worshipers are at home, either uninvited to this Sunday’s grand opening, or they are there invited into the socially-distanced sanctuaries to mumble their monastic praise chants from behind their mandatory masks…Minnesotans are waking up a week later to find that thousands of privileged Minnesotans are exceptions to this rule, and have police and National Guard approval to congregate safely on the streets…as long as they promise to refrain from singing whilst pilfering Play Stations and air fryers from Target, presumably.

Put a pin in this, readers. If there is not a SERIOUS outbreak of COVID-1984 in Minneapolis in the next two weeks…we have all been HAD. Because there’s a whole heckuva lot of non-socially distancing hooligans screaming, shouting, salivating, and no doubt SPITTING their germs all over each other down there on Lake Street…and if they don’t make each other sick, a bunch of black-coffee swiggin’ Swedes singing Softly and Tenderly aren’t going to either.

[1] WEIRD is a socially engineered social science acronym which stands for: westernized, educated, industrialized, rich, and democratic. The phrase is allegedly in reference to nations, not individuals or people groups, but suffice it to say, it sounds a lot to me like a tongue-in-cheek way for liberals to say “privileged white folk” without breaking all their own politically-correct rules about tolerance, respect, and dignity.