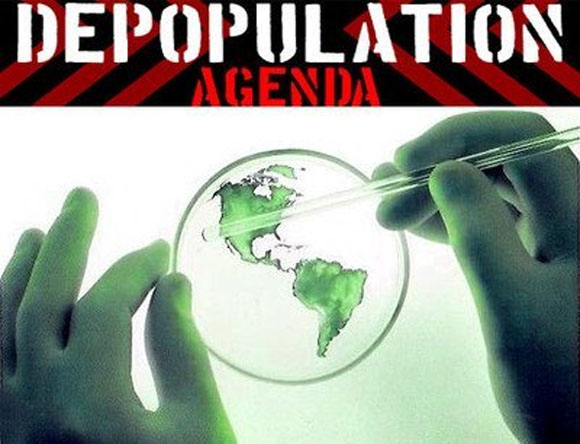 Let’s play “Connect the Dots.” What is the common thread that runs through the six news headlines below?

Prince William argues for urgent depopulation efforts in Africa: Prince William recently warned that the population growth in Africa is putting a tremendous amount of pressure on the natural world and driving many species of animals to extinction.[1] (Note the 10th Georgia Guidestone “commandment” below).

Most black Americans voting for Democrats unknowingly support black genocide through Planned Parenthood: Dr. Martin Luther King, Jr. once said, “Nothing in all the world is more dangerous than sincere ignorance and conscientious stupidity.” He was a brilliant man with a highly intelligent message, and if he were alive today, he would surely recognize the insidious “deep state” plan for depopulation that begins and ends in the largest cities of America, where more blacks reside, by far, than anywhere else in the country. The Democratic Party’s main objective (in order to regain power and keep it) is to literally “enslave” their voters by giving away free stuff (welfare and food credit) while promising tax breaks for the working class.[3]

“Population Engineering” is the new term for population control, just like “climate change” replaced global warming:  Leftists cannot be honest and open about their political, social, and cultural ideas because they know that the vast majority of people would reject them. As such, they learned long ago to change the language and the meaning of words in order to mask and camouflage what they’re really trying to do.[4]

Called the Tuskegee Study of Untreated Syphilis in the Negro Male, the study initially included 600 black men — 399 with the disease and 201 without. While the men were told they would receive treatment, however, the researchers never provided adequate treatment for the disease. Even when penicillin became the preferred and available treatment for syphilis, researchers kept their subjects in the dark.

Although originally planned to last only six months, the experiment continued for 40 years. Finally, in 1972, an Associated Press article prompted public outrage and a subsequent investigation. A government advisory panel deemed the study “ethically irresponsible” and research ended almost immediately.

As a result, the government settled a class-action lawsuit out of court in 1974 for $10 million and lifetime health benefits for all participants, the last of whom died in 2004.

Time magazine writer, Jamie Ducharme, during an interview with Melinda Gates, asked [Melinda] who needs vaccines after health care workers, Gates told the magazine, “…in the U.S., that would be Black people next, quite honestly, and many other people of color.”

From the get go, we have heard that the populations most susceptible to COVID-19 are the elderly and those with pre-existing health conditions. So, why wouldn’t they be the firs in line to receive the vaccinations? According to Melinda Gates, “…anti-racism protests following the death of George Floyd, an African American man…fits into health equity, especially with development of a COVID-19 vaccine.” I am not entirely sure how protests (which were attended in my city by thousands of people of multiple ethnicities) somehow equates to black people suddenly being the highest risk population for contracting COVID-19.

The now infamous “Georgia Guidestones” made their rounds on social media and You Tube several years ago. The stones are referred to as the “American Stonehenge” and the “Masonic 10 Commandments.” This granite eye sore is a work of masonry (wink! wink!) and the authors remain anonymous (i.e. “hidden” – read “occultic”). The stones blatantly advocate for population control, eugenics, Gaia worship, police state politics, and globalism. But no one other than a minute gaggle of conspiracy theorists pay these monolithic monstrosities any mind.

The 10 masonic commandments are engraved upon the granite in eight different languages: English, Spanish, Swahili, Hindi, Arabic, Chinese, and Russian. The guidelines are as follows:

There is currently an estimated 7.7 billion people alive today. Let’s round that up to a nice, even 8 billion. That means, according to the Guidestones, we have a pesky 7,500,000,000 people to extermin…errrr…”relocate into underground pine suites”….

The sad thing is, for all of their supposed “secrecy,” these secret society spooks are not doing one thing to hide the fact that the first people group they are planning for extinction is the African and African-American populations.

The “wolves in sheep’s clothing” who are holding positions of power within the U.S. and the U.K. are, by all appearances, extending a helping hand to impoverished minorities. They are waving a white flag (quite literally), but this flag is no symbol of peace, but the handshake of death.

Hitler’s vision continues to unfold, carried out by his political progeny, all pining away in their dark hearts for the resurgence of their glorious New Golden Age, ruled by their pompous Aryan race.

It is crucial that all races in the U.S. come together, set aside all the socially engineered, needlessly polarizing “categories” that the elites have churned out of their overly contrived “rival-generators,” and start thinking for ourselves, and loving one another the way Christ exhorts us to love in John 15:13:  “Greater love has no one that this: to lay down one’s life for one’s friends.”

Ethnic minorities—born and bred American citizens—are under attack in our country and we “white folk” need to pray, intercede, fast, speak up, speak out, support, and fight this egregious ethnocentric madness alongside our brothers and sisters. We are entering an age where it is no longer about cultural race, but about the human race. With the emergence of the Internet of Things (IoT), sentient technology, quantum computing, A.I., and Transhumanism, we must be unified as a human race; and as Yahweh’s “chosen race,” (1 Peter 2:9) we must fight to remain who Yahweh created us all to be—men and women created in His image.

Details about the Melinda Gates Time Magazine interview were added to this article on July 2, 2020.